Summary: In Qlik script SET is often a better choice than LET, even when the value contains quotes.

I sometimes see the LET script statement used when SET would be syntactically  easier and more readable.

eSales stores an expression that will be used later in charts.  It could also be written (simpler in my estimation) as:

So far just a matter of style, but the difference becomes clear when we have quotes as part of the string, for example, “Region={‘US’}”.   As LET requires a quoted string,  embedded quotes require some sort of escaping.  In QV10 and earlier, a common way to write this with LET would be:

Not real pretty. Many people carry over this style even though QV11 introduced two single quotes to represent an embedded single quote.

Easier to read for sure.  But I think it’s even easier with SET.

That’s it. No special escaping required, just type it as it should be.  What about those quotes? Shouldn’t SET strings be enclosed in quotes?

I find the documentation on SET to be thin, but here is the rule as I understand it.

Single or Double quotes in a SET statement require no special treatment as long as they are balanced (even number of quotes).

If the quotes are unbalanced (odd number), then the entire string needs to be enclosed in quotes or brackets.  Use double quotes if we are enclosing single quotes.

I always favor SET over LET unless I truly want an evaluation.  An exception to this is the string “$(” which will trigger an Dollar Sign Expansion, even in SET.

For more on character escaping in Qlik from HIC see https://community.qlik.com/blogs/qlikviewdesignblog/2015/06/08/escape-sequences 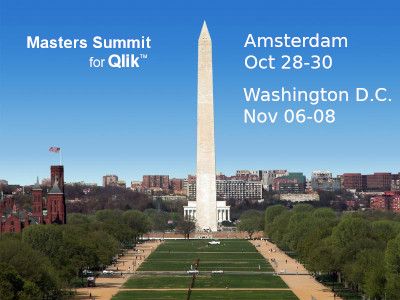