The Now() function operates differently in script and charts. This post will highlight one difference that has tripped up even experienced developers.

Our example script requirement is to extract rows of data where the “TransactionDatetime” field value is within the last 24 hours. We’ll use the “Now()” function to establish the current time. Here’s the doc from the QV Ref Guide.

Returns a timestamp from the system clock. The timer_mode may
have the following values:
0 Time at script run
1 Time at function call
2 Time when the document was opened

Default timer_mode is 1. The timer_mode=1 should be used with
caution, since it polls the operating system every second and hence
could slow down the system.

Which timer_mode option do you choose? Hmm… you want 24 hours prior to the script execution so it seems like “0” is the best option. Plus there is that scary warning about “1” slowing down the system.

The integer 1 represents a day — 24 hours — so you code a where clause in your LOAD like:

During development, you reload several times. You examine the data selected and it seems to be working — you are getting data from the last 24 hours. It’s 4:00pm Tuesday afternoon and you promote this to the server and set a reload schedule of daily at 8:00am. A test run on the server shows the data selection is working as planned.

The document reloads on schedule at Wednesday 8:00am. A review of the app shows data going back to Monday at 4:00pm.  After Thursday morning’s reload the data range is Tuesday 8:00am to Wednesday 8:00am. What happened to the rest of Wednesday and all of Thursday?

So on Thursday morning Now(0) returns Wednesday 8:00am — the end of the last execution. That is not what we were looking for.

In Charts, Now(0) returns the end of the latest script execution, which would be Thursday 8:00am.

Now(1) always returns the time when the function is executed — the “current” time. During development when reloads are frequent, script Now(0) is usually pretty close to Now(1) and you may not notice the difference. But when a document goes on a daily reload schedule, Now(0) is usually an entire day behind what you want!

The correct choice in script is generally Now(1), which returns the time when the function is actually executed, not a time related to previous reload.

If you need to establish a deterministic (consistent throughout the entire script) value for “Now” in script, set a variable at the beginning:

Then use vScriptStart as the reference point in your script. It may also be used in charts as well.

Consider the chart below.  The Expression for the column labeled “Net” is:
=sum(Quantity * Price) * (1-Discount)

Let’s add another column for “Commission”, defined  as 10% of Net. Instead of repeating the Net calculation, use the expression:

Qlikview allows referencing the value of another column in the same chart by name. The name is the value assigned to the column label. “Net” in this case is not a Field. It is a symbolic reference to an expression. It may be used in other expressions in the same chart, but not in places where a Field name is expected.

Column references can be very useful in Expression attributes. Let’s bold any Commission value over $200. We’ll use a Text Format expression of:
=if(Commission > 200, ‘<B>’)

Now you own a brand new power saw (Qlikview). But do you know how to build a house?
A key feature of Qlikview is graphical representation of data. Do you have the skills to use that capability effectively? The challenges of effective visual communication are not unique to Qlikview. The principles of visual communication can be learned and there are many resources available to learn from.
An important and useful work to me has been the book “The Visual Display of Quantitative Information” by Edward R. Tutfe (ISBN-0961392142). In this book, Tufte defines and articulates many important principles of statistical graphical representation, including the “Lie Factor” “Chartjunk”, and the “Data-Ink ratio”. The principles of Chartjunk and the Data-Ink ratio ask us to consider which of these two charts communicate more effectively. 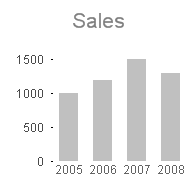 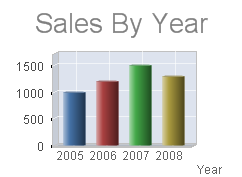 Tufte has authored several more books that expand and illuminate these themes of quality and effectiveness in graphical communication. All of the books are beautifully printed. Tufte also teaches seminars and maintains a web site at: http://www.edwardtufte.com/tufte/

Another work I have found very useful is “Information Dashboard Design” by Stephen Few (ISBN-0596100167). This book applies visual communication principles from Few, Tufte and other researchers to the practical application of “dashboard design” . Few’s book analyzes the shortcomings of some poor designs and then goes on to enumerate a number of elements for effective designs. He closes the book with some examples of optimal designs.

Stephen Few also teaches public workshops. His schedule and blog can be found at http://www.perceptualedge.com/.

Lastly, the IBM Many Eyes project http://manyeyes.alphaworks.ibm.com/ is an ongoing source of inspiration and amusement.

I recently submitted a feature request to Qliktech requesting “grouped objects”. There are a number of issues to consider when thinking about how grouped objects should be implemented in QV.

You are probably familiar with the idea of grouped objects. It’s a feature commonly available in graphics authoring programs Select a set of objects and mark them as “grouped”. Operations such as Move or Resize then apply to the group.

The problems I’m trying to address by asking for grouped objects:

If QV would let me select a set of objects and mark them as a “group”, how should the group of objects respond to various user actions?

Let’s first consider a group of two objects that are related, but do not overlap on the screen. For example, a straight table and text box. The text box contains some summary data from the table. Here’s are some possible behaviors:

Let’s consider another case. Two overlayed bar charts are used to create a Bullet Graph. One chart also contains a button in the caption area. It’s critical that the overlayed charts maintain position and size relative to one another. The button is a fixed artifact that should not resize but must remain in the “correct” position. How should the behavior differ from the example above?

If one of the charts is resized or maximized, both charts must resize. The button should not resize. This could be controlled by use of the “allow move/resize” property of each object. If the property is checked, the object will participate in a group resize. If unchecked, the object will not resize with the group. However, all objects will maintain relative position.

Your comments and improvements on this proposal are welcome.

Update 01/09/2009: What about Object “Print” and “Copy To Clipboard -> Image” functions? My proposal would be to include all objects that share a pixel with the right-clicked object.

A common application of QV macros is to make initial selections. These selections may be applied when the document is opened, a sheet is activated or a button is pressed. The selections usually involve some type of dynamic value, such as “today()”.

In the examples below, the VBS continuation character “_” is used to indicate the statement continues on the next line. You may type the statement on a single line if wish and omit the “_”.

A typical macro to select yesterday’s date looks like this:

It’s all VBScript, but the functions used come from two different products. The ActiveDocument…Select is from the QV API, and the Date() function is a VBScript function. To make this work, you need some knowledge of VBS functions. In addition, there may also be a type mismatch — the VBS function returns a number and the Select expects a string. Fixing that issue requires adding a CStr() or CDbl() function.

What if you want to make a more complex selection. Like the weekday for today? Or a selection that requires knowledge of the data values — max(ShipDate)?

Wouldn’t it be easier if you could use QV Expressions to define the selection expression? You can, with the ActiveDocument.Evaluate API function. Here are some examples.

The Evaluate argument is any expression that can be evaluated by QV. So you can stick with the QV functions you are used to. Those functions are also more likely to produce the correct data type for your selection. And most importantly, you get easy access to the QV data — (“max(ShipDate)”).

You can even use QV search operators such as “>”. For example, to select the last 7 days:

I hope you find this tip useful.

I recently had a requirement to create a heat map of the US States and set about exploring if there was an easier way than creating a QV scatter plot mapped over an image.

I found the Google Chart API. With some help from the QlikCommunity forum, I got a fairly pleasing result.

The Google Chart API is provided free by Google. You pass in an http request with parameters that describe the data and desired layout, and a chart image is returned. I won’t cover the details of the API, it’s well documented at http://code.google.com/apis/chart/. Rather, I’ll share my experience integrating it with QV.

Here’s a screenshot of my results. The map will update as selections are made in the Sales chart. The generated map is not clickable. It’s just a static image. 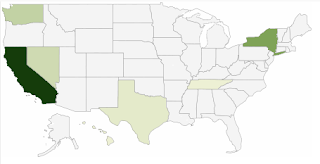 A working QVW of the above may be found in the Qlikview Cookbook at:
http://robwunderlich.com/Download.html

The map is a Straight Table with a single expression. The expression is the http://… string used to generate the map. The representation for the expression is set to “Image”. Thanks to Tom on the forum for showing me this technique.

The OnAnySelect document event is used to trigger a “showMap()” macro that creates the variables needed for the http string. In a production application, you would want to be more selective and use field level events on the fields relevant to the chart.

In addition to chart layout parameters, the http string contains two parameters that describe the data.

The States and Values are associated by ordinal position in the respective lists. I could not find a way to keep the lists in sync by using QV expressions alone. The solution was to use the Sales chart as my “data source”. The macro walks the rows of the table to build two variables — the State codes and the Sales values. Here’s a snippet of the macro code:

Another area where VBScript was useful was in encoding the data values as specified by the API. I chose the “simple encoding” method. The Sales values are translated to relative values within a range of single characters defined by the API. The doc http://code.google.com/apis/chart/#simple provided a javascript encoding example which I converted to VBS.

The encoding algorithm requires that the maximum value of the dataset be known to properly spread the individual values across the relative range. To determine the maxvalue in the macro, I use the QV evaluate() function to “callback” to the QV expression language.

Producing a chart with the Google API does have some downsides. The user must be connected to the internet and the chart will render slower than a native QV chart. It also does not provide for making selections in the chart and tooltip values like a QV chart does. But I found it to be a simple solution to my requirement. I hope that someday the QV product will provide regional maps as chart types.

Update October 3, 2008: Alistair on the QlikCommunity forum has posted an example of calling the Google Chart API without using macros, which I find to be the preferred method:

The next update to the Qlikview Cookbook will include the “macro-less” technique.